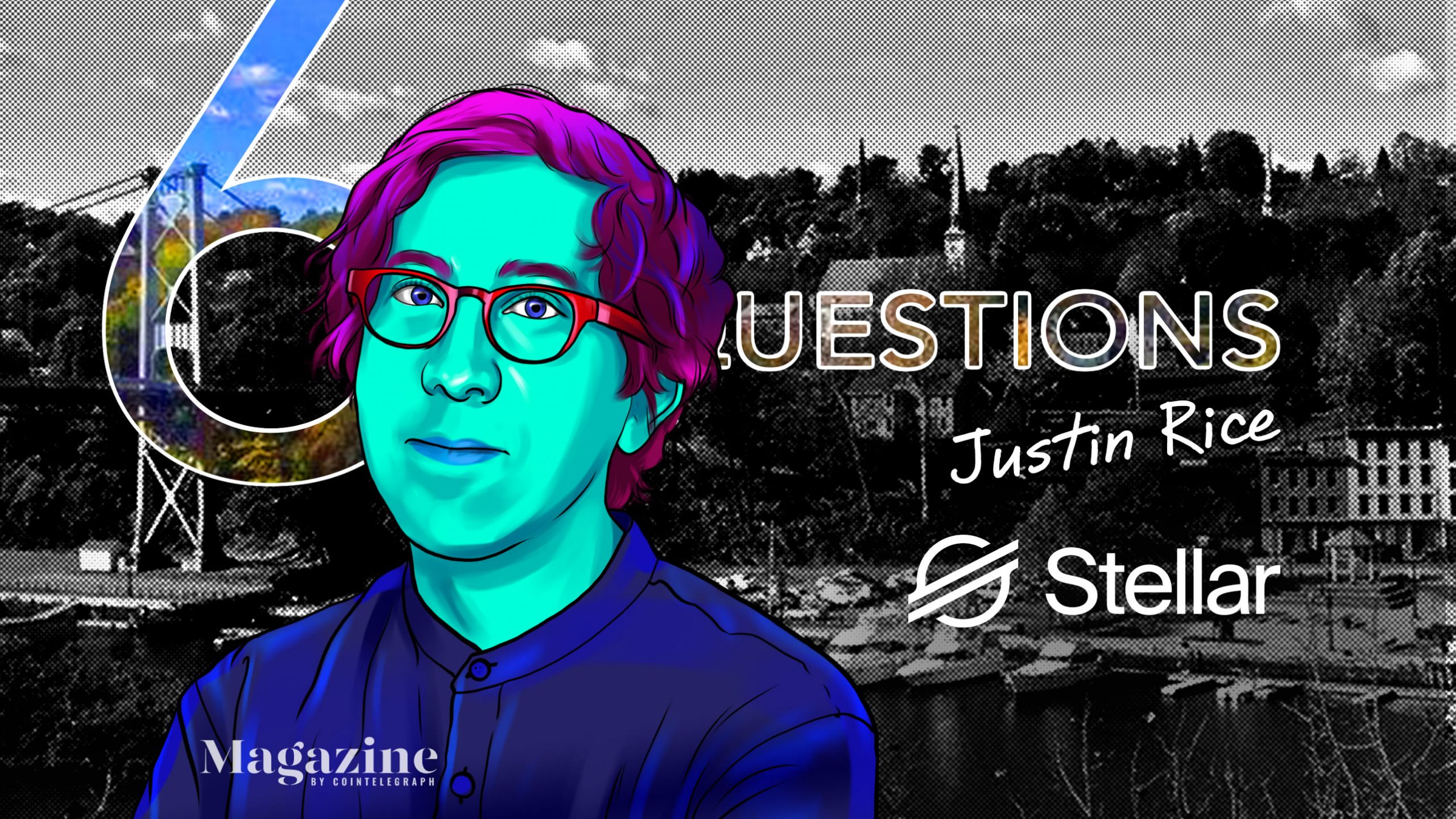 Each week we ask the buidlers in the blockchain and cryptocurrency sector for their thoughts on the industry… and we throw in a few random zingers to keep them on their toes!

This week our 6 Questions go to Justin Rice, Head of Ecosystem at the Stellar Development Foundation.

Stellar Development Foundation (SDF) is a non-profit organization that supports the development and growth of Stellar, an open-source network that connects the world’s financial infrastructure.

Justin speaks on behalf of developers building on the Stellar network and coordinates the members of the Stellar ecosystem, with the ultimate focus on growth and development of that system. He became familiar with the Stellar technology and its benefits during his time working in product development. In that role, he helped build an exchange, called StellarX, which utilizes the Stellar open-source technology.

Justin holds a Bachelors of Arts degree in Comparative Literature from Harvard University.

I think back longingly to the days of Web 1.0: the weird websites, the super cool fonts, the sense of limitless possibility. Sure, things were less organized and it was hard to find your way around, but it was a lot more fun. Consolidation of the internet increased connection, but it also created siloed echo chambers and led to visual uniformity, and there’s no way to uncross the bridge.

Right now, I think the crypto industry is still in an era of exploration, and I think (and hope) 2020/21 sees increasing diversity rather than consolidation. New chains: bring them on! Middleware: let’s do it! Everyone benefits as we all support each other, and as we listen to new ideas and encourage experimentation. Interoperability is important — and I think the entire industry should look for ways to collaborate and connect — but it’s too soon to get uniform.

I’m rooting for the rag-tag innovators to keep pushing the limits, and to see what’s possible before picking a path.

2 — Other than the present day, in what time and in what country would you like to have lived?

I would have liked to work in Edison’s lab. To be there for the birth of the light bulb, the advent of sound recording, the earliest forays into motion pictures: that would be amazing. You can still visit it — not today, because it’s temporarily closed due to Covid, but hopefully soon — and there are these amazing shelves filled with materials they’d experiment with: rubber, glass, clay, metal, whatever they could get their hands on.

The whole place is stocked with odds and ends, and in room after room, you can picture people in lab coats coming up with crazy ideas, and figuring out how to put them to the test. I would love to experience that early and intense time of innovation.

3 — What will happen to Bitcoin and Ethereum over the next ten years?

Ten years! Wow. That’s an impossibly long time. The bigger question: what will happen to the world over the next ten years? How long will it take to recover from the current crisis? What other crises will rear up and drag down income, productivity, and livelihood? How many lockdowns will we have to live through? Will we be ten years closer to utopia, or living in some kind of post-apocalyptic nightmare? The answers to those questions will really determine the future of Bitcoin and Ethereum.

That said, my off-the-cuff predictions: In ten years, the Bitcoin network still won’t be used for day-to-day transactions: it’s too slow, transactions are too expensive, and there’s no good way to make it user friendly. Plus, you can only use Bitcoin to transact in BTC, and getting the world at large to believe in an obscure currency feels like an impossible challenge. Bitcoin may never shake its association with drug dealers and ransomware, and — barring some kind of radical change in the electricity required for PoW computations — its environmental impact will become increasingly unacceptable.

In 2030, BTC will be like the Krugerrand: a gold standard prized by collectors with a somewhat tainted history. Unlike a Krugerrand, however, you can’t melt it down for fillings if you need to perform home dentistry in the post-apocalypse.

What happens with Ethererum, on the other hand, depends entirely on the rollout of Ethereum 2.0. When I was working on StellarX, a front-end user interface for Stellar’s built-in decentralized exchange, we ran some tests to see how Ethereum scaled, and discovered that the more transactions we pushed to the network, the worse the network performed. Which is the exact opposite of what you’d expect when building an app. Improving scalability is a big part of what’s motivating the creation of Ethereum 2.0, and I applaud the ambition and the initiative.

But will it work? It’s like having a train careening down the tracks behind a diesel-powered locomotive, and deciding to switch to an electric locomotive not by stopping the train, but by building a parallel track, and moving every car over without losing momentum. It’s a challenge, and I hope they manage to pull it off.

If they do, then Ethereum 2.0 will open up a green field for developers to build a new generation of distributed apps. If they don’t, in ten years, we’ll be saying: “Remember Ethereum? Whatever happened to that?”

4 — Thinking of a favorite poem or musical lyric, what is it and why does it speak to you?

From the Smiths: “Now I know how Joan of Arc felt when the flames rose to her Roman nose and her Walkman started to melt.”

As a teenager sulking in self-professed martyrdom, I’d ride the bus with my headphones on, and when this song came up, I’d think: Yes! I get it! Now that adolescence is long past, I listen to it, and realize that unlike Joan of Arc, I survived it all pretty easily, and that the flames of the proverbial stake, unlike the flames of the actual stake, won’t melt your Walkman.

So while I didn’t really get how Joan of Arc felt, this song — and others like it — helped me keep on keeping on. They still do. The cleverness makes me chuckle, it has a great cadence, and I like the fact that Joan remains defiantly attached to music that’s clearly central to her identity all the way to the bitter end. Plus, it reminds me that a technology as simple as the Walkman can make you feel empowered in an intensely personal way. Even on your worst day.

5 — What does decentralization mean to you, and why is it important?

The world isn’t fair, and that’s not right. You can’t choose where you’re born, and where you’re born determines whether or not you have access to financial infrastructure, and therefore, to money. If you happen to be born under a despot, or in a country with unstable currency, or in a region with no access to banks, your opportunities are limited from the get-go, and that makes it hard to create something new, to build a better life, or to make meaningful contributions to your community.

The effects of access accrue over generations, and the divide deepens. Decentralization can make the world more fair.

Payment systems that connect the world — internet-style — provide access to regions overlooked and underserved by traditional banks, let individuals everywhere build credit and acquire capital, and prevent censorship and control by a single incompetent or despotic authority. Distributed ledgers are a neat technological workaround that empower innovative thinkers to fix inequality on the ground.

Do I want to see policy solutions and social initiatives designed to improve access to financial infrastructure and fix income inequality? Yes. Yes I do. But that’s a personal opinion, and a lot of people disagree. There’s no political consensus about if or how to make the world more fair.

But decentralized technology that creates programmatic consensus to seamlessly fix inefficiencies and increase opportunity? I think it may prove to be unstoppable.

6 — Close your eyes and think of a happy place. What do you see?

It’s dusk, and I’m in the stern of the big yellow Old Town canoe my wife and I picked up at a garage sale for peanuts. We’re paddling lazily up the Hudson near the western shore, drifting past the abandoned brick factories, keeping an eye out for deer, kingfishers, ospreys, and the occasional fox.

Just as the sun sets over the Catskills, my wife in the bow uncorks the wine and turns to pour us each a glass.

Record Ethereum Network Use and Gas Fees Pose Risk to DeFi Expansion
Is the Bitcoin Bull Market in Jeopardy After Failure to Break $12,000?
Comment