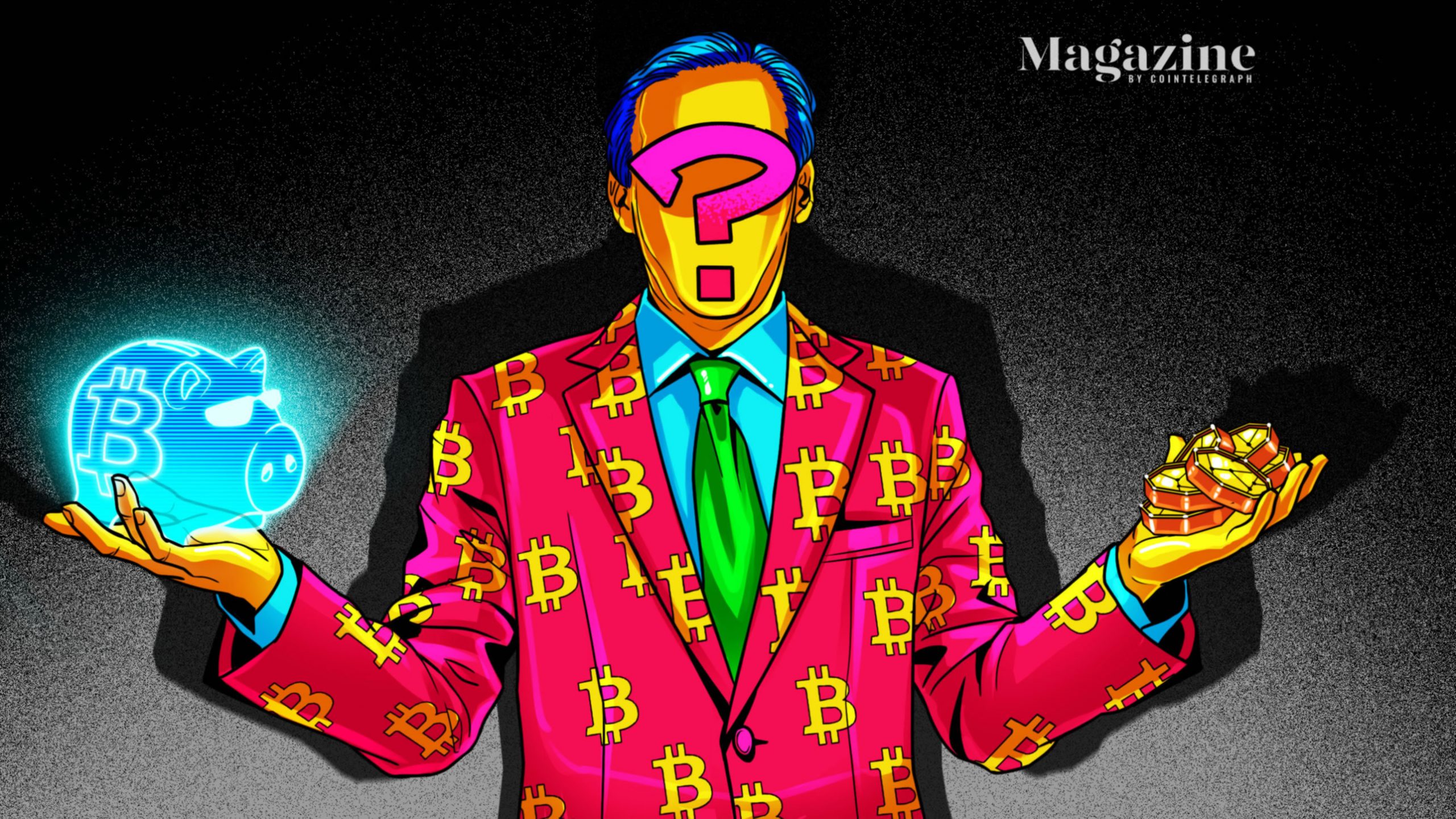 Bitcoin is not being. Bitcoin is becoming. The perpetuation of its identity is not terminal but rather instrumental to something else. Bitcoin maintains identity so that it can serve its meaning. And, like identity, meaning is malleable and exists only in the hivemind that projects it.

A more revealing way to think about Bitcoin then is not to understand it as a physical construct — as a decentralized payment network operating on a cryptographic protocol — but as narrative. And don’t just think of it as narrative in the most straightforward meaning of the word, as a representation or imitation of reality or a cultural artifact, but also take into account its deeper aspects — i.e. narrative as being constitutive of consciousness itself.

Narrative is not just as our mind’s way of describing being, but also as its way of expressing and creating the possibilities of becoming. In other words, narratives aren’t merely representations or imitations of reality — they are reality. Creator and author of Epsilon Theory Ben Hunt, whose ideas we shall visit again later, defines the concept of narrative as “a thoroughly postmodern idea. What I mean by this is that Narrative is a social construction, a malleable public representation of malleable public statements that lacks any inherent Truth with a capital T[…]”

While the epistemology of Truth with a capital T is beyond the scope of this piece, and while indeed the brilliant thinkers at Epsilon Theory are never too far from the truth (whatever it may mean) when they opine about narratives, there’s an implied false dichotomy between ‘narrative’ and ‘reality’ in the above definition that mustn’t remain unaddressed. If we choose to understand narratives as mere cultural artifacts — as nothing but products of our idle minds — then yes, narratives can definitely be deemed “untrue” or “disconnected from observable facts.”

But if we take the other, more unorthodox approach, and consider narratives as being constitutive of consciousness itself, then the true power of narratives — as creators and destroyers of worlds — becomes evident.

And, to be perfectly clear, this isn’t just semantic hair-splitting. The point is to convince you that, for all that matters, the narrative is all there is. It is narratives that make the world go round. There isn’t some occult deeper layer beyond the narrative where Truth with a capital T resides. Even if there is, we have no access to it. To borrow a quote from cognitive scientist Joscha Bach: “Our experience of the world that we’re embedded on is not a secret direct wire to the physical reality. Physical reality is a weird quantum graph that we can never experience and get access to.”

All we get to experience — as Paul Ricœur, the philosopher who’s given us the most comprehensive characterization of narrative to date argues — are phenomena “emploted” with narrative. If we can’t, by definition, experience the noumenon, and we never get to escape our brain’s simulacrum of reality, then all we’re really left with is… narrative.

But in reality, this isn’t the case. It’s the same blunder in thinking that presupposes the false dichotomy between narrative and reality we mentioned earlier. It’s not the code or the protocol that constitutes what we conceive to be Bitcoin, it’s the narrative that’s attached to it. Bitcoin’s code can be, and has been, changed many times before, all without triggering any shifts in narrative. In fact, out of the few radical shifts in Bitcoin’s identity that have occurred over the past eleven years — none were caused by changes to the code or the rules of the protocol.

Indeed, it was always the other way around: when the narratives change — the entire nature and identity of the asset changes. It’s almost as if the asset is nothing but the underlying derivative of the narrative.

Narratives dictate how we perceive Bitcoin, and when they shift, our behavior changes, which then, in turn, changes the whole game: the way the entire industry operates, the businesses, the consumers, the legislation, the enforcement — everything.

Perfect evidence of this phenomenon can be found when we take a closer look at Bitcoin’s switch from digital cash to digital gold. From 2013 to early 2017 the vast majority of bitcoiners viewed and wanted to use Bitcoin primarily as a means of exchange and secondarily as a speculative asset. Despite the fact that Bitcoin was just as scarce then as it is now, rarely did anybody hodl it with conviction or think of it as a savings technology or a superior store of value in any meaningful way. Bitcoiners were obsessed with being able to buy cups of coffee with it, and the majority of the discourse at the time revolved around how cheap the transactions were and how to convince as many merchants to accept Bitcoin as payment.

Then, sometime around late 2017, early 2018, when the legendary bull rally came and the transaction fees skyrocketed, what could be sensed brewing under the surface finally burst onto the scene. First gradually, then suddenly, and without any changes to the protocol, Bitcoin became digital gold.

Okay, okay. It didn’t really become digital gold overnight; the digital gold narrative was, as a matter of fact, gaining traction even as far back as 2015, but for all it matters, it wasn’t until the digital cash proselytes migrated to Bitcoin Cash in mid-2017 that it truly became mainstream.

The point is, today’s Bitcoin is in no way shape or form a currency — simply because nobody looks at it in those terms any longer. Despite everything being the same on the protocol layer, nobody in their right mind would spend Bitcoin as currency today. And why is that?

It’s because the narrative inalterably transmuted Bitcoin from lead to gold. Bitcoin went from being one type of asset to another — from a digital currency or a medium of exchange to commodity money and a store of value.  And this process, which can hardly be interpreted as anything other than narrative alchemy, resulted in actual transmutation of the asset, and not just in some superficial shift in community sentiment.

In 2018, an independent Bitcoin researcher going by the pseudonym Hasu wrote a brilliant piece on a similar topic titled Unpacking Bitcoin’s Social Contract which cuts right to the core of this matter:

Bingo. Bitcoin’s identity is forged on the social layer and then is but transcribed onto the protocol layer. The social realm is where Bitcoin lives and where Truth with capital T is decided. But, this now begs the question: who makes the rules? Who controls the narrative?

Narratives, after all, have to come from somewhere — they do not arise spontaneously, from the void. They either develop organically, by the unnoted dissemination of the underlying composite memes, or they’re created by fiat. So, where did Bitcoin’s store of value narrative come from? Did we arrive at it by virtue of inertia, or was it perhaps a product of manufactured consent?

If we turn to the Bitcoin community, today the majority of it seems to believe that the currently prevailing store of value narrative emerged organically, as a direct result of Bitcoin’s protocol design. Even Satoshi himself used analogies of gold and gold mining to explain Bitcoin, and what is gold really if not a store of value?

And while many pundits consider this vision of Bitcoin self-evident, it bears reminding that, in terms of narrative, it wasn’t always this way. Bitcoin was for long envisaged as a monetary weapon — a weapon poised to undermine Caesar, take what is his, and render it back to the people.

Bitcoin was a revolutionary, disruptive, and seriously dangerous idea. It is only recently that the overarching mythos changed from “overcoming the monster” to “rags to riches,” or in crypto terms “when Lambo?”

“Bitcoiners are taking on the role that gold owners had for the last 50 years. It’s a role where you find yourself now essentially hoping for economic collapse […] You’re being balkanized; it is the true original meaning of the ghetto — where you’re having this neighborhood constructed for you, and you’re like ‘Ow look how nice this is!’ and then you move in and realize ‘Ow ow ow, now I’m here — I’m the grumpy old man that yells at clouds now.”

It’s a miserable way to live, says Ben. And in many ways, he’s right. We’re like frogs in boiling water; we were lured into the pot by the promise of riches and now we’re trapped in a reductionist narrative that fails to tell the world the whole story of Bitcoin. It’s a huge step down in ambition. From a positive change movement, the community transformed into a bunch of cynics waiting for bad things to happen only to be proven right.

Perhaps Ben is correct. Maybe the powers that be have a bigger say in Bitcoin’s story than we’d like to think. Perhaps the community believes what it believes today because its consent has been manufactured. After all, the digital gold narrative is preserving the status quo — not challenging it. The governments of the world are unfazed by it. What could’ve been the biggest threat to their monetary sovereignty has been neutralized by a mere change in narrative. Coincidence? Who knows. But it’s certainly something to think about.

Regardless of what anyone thinks of Ben’s narrative inquiry into Bitcoin and the origins of the store of value narrative, the most important point to consider here is that Bitcoin’s still an uncrystallized idea. Bitcoin is still becoming — still searching for its final narrative form.

The presently dominant narrative is but one of many narratives competing for the soul of Bitcoin. Bitcoin was born out of the 2008 financial crisis, and its present identity is heavily influenced — if not entirely molded — by it. But this may not necessarily be the final form Bitcoin appropriates in the future. Sound money, global currency, global base settlement layer, anonymous and fungible digital cash — these are all visions of Bitcoin that may one day resurface if the right conditions emerge.

Now that we’re facing the worst economic crisis in the last one hundred years, Bitcoin’s store of value narrative is increasingly being called into question, which means that its day may come sooner rather than later. Central banks are printing an order of magnitude more fiat currency now than they ever did, and Bitcoin, by all accounts and measures, is supposed to thrive and prosper in such macroeconomic conditions.

This is the narrative make-or-break point.

If Bitcoin doesn’t perform well as an uncorrelated financial asset and it doesn’t ascend (or at least maintain) its value in fiat-denominated terms, then the store of value narrative will shatter and Bitcoin will have to either reappropriate some of the other, already existing competing narratives, or reinvent itself into something else entirely. If, on the other hand, Bitcoin succeeds as a store of value, then this narrative will cement and assume a relatively stable form.

Whatever narrative Bitcoin assumes after it crosses the event horizon, it will be one that defines it for years (if not decades) to come.

Four cryptocurrency block reward halvings to look out for in 2021