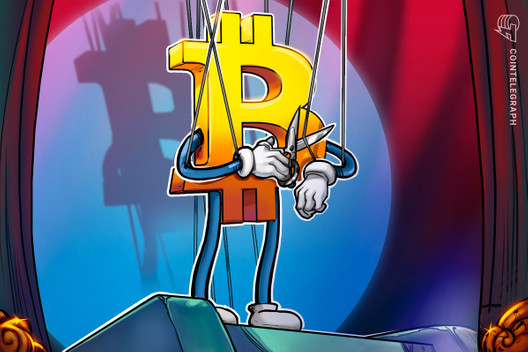 On Sunday Aug. 2 the price of Bitcoin (BTC) dropped by 12% in just 5 minutes. In the same period of time Ether (ETH) dropped by 21% and similar losses were observed with many other altcoins.

In retrospect, the general consensus on the cause was an unknown entity unloading roughly $1 billion on the open market during a time of low volume and liquidity.

At first thought, one would assume that selling such a huge amount in an illiquid market would be to the detriment of the seller, but given the size of the move, we don’t think the seller was unaware of what would happen.

In fact, it’s entirely possible that the orchestrated move was 100% intentional. Here is how the crypto market was thrust into a sharp correction with one large sell.

How the flash crash may have been intentional

This was a well thought out move which involved the buyer beginning to buy coins in the spot market when the price was nearing and obvious kety technical resistance.

After the investor built a position, they then put in a large market order to take down all the offers on the order book and push the price sharply below a key resistance level.

This maneuver triggered a significant number of buy orders from other investors who had stops to buy above the resistance level. At the same time, a short-squeeze was caused due to traders who were short from this resistance level.

The investor who submitted the large market order now enjoys the price appreciation of the coins bought before the breakout, following the ignited momentum.

After some time, this trader decides that it’s time to ring-up the register. Thus, he quietly builds a short futures position on various exchanges using different accounts to be as stealth as possible.

Using 30x to 50x leverage, the investor is able to maintain the position even if the price of the underlying asset goes up by 2% or 3%.

Once he has accumulated a big enough short futures position, he then sells the previously purchased stash of BTC at market rate when the market exhibits low liquidity again.

By doing this, all the bids in the order book are taken out, resulting in a price crash which ignites as he had built before a short position with futures. The result is, a nice profit is locked in from the short position.

A few examples of how it’s done:

A trader builds a stealthy position of 100 BTC with about $1 million of cash at an average price of $9.9K. Then he puts a market order to buy 100 BTC at the time when the market liquidity is low and this pushed the price instantly to $10.4K.

This means his average position is 200 BTC at $10,150. The move above the obvious resistance price triggers other traders to buy above $10K, and also catalyzes a short-squeeze that forces short traders to cover their position by buying back the underlying. This results in even more upward pressure on the price of the underlying and phase 1 of the traders plan is complete.

Now BTC sits at $11.8K and the trader manipulating the market begins to build a short futures position with 30x to 50x leverage. For simplicity, let’s consider 50x leverage, meaning for $1 invested, $50 of the underlying asset is obtained.

The trader again builds a stealth short position in futures markets across several exchanges using multiple accounts. As he is leveraged 50x, in order to cover his long position of 200 BTC worth $2.36 million, he needs to sell shorts for only 200BTC / 50 = 4 BTC.

He would then use some of the proceeds from his initial buy to cover the margin of futures contracts worth 4 BTC.

Of course he can also sell more futures in order to further magnify the move and his upcoming ill-gotten profit also.

The trader completes his witty strategy by selling the 200 BTC he initially bought at market all at once when market liquidity is low.

This results in crashing the price of BTC from $11.8K to $10.1K. His long position price was $10,150 so while he takes a little $10K loss on his initial position, he profits significantly from the futures sold short. The result is a net gain of $330K or 16.5% of the initial $2 million invested and all of this was done with minimal risk.

Obviously, this is an overly simplified example of how big players manipulate the market and take advantage of weekends when liquidity and trading volumes are lower.

This sort of setup requires a significant amount of upfront capital and decent trading infrastructure in order to execute seamlessly. But, given the liquidity and volatility of the crypto market versus traditional markets, just $10 million of capital could lead to decent returns with minimal risk.

This is at least feasible until regulators step in.

There are ways to perpetrate this maneuver with even more leverage. By using futures to take the initial long position which requires on a fraction of their notional value to trade, and buying put options instead of selling futures to profit even more off the provoked downward move due to the convexity of the options.

However, such practice requires specific market conditions (i.e. a well-regarded instrument with price nearing a key technical point) and an easy to manipulate instrument (i.e. an instrument for which derivatives exist). Therefore, this play cannot be conducted all the time.

Basically, the entire maneuver is market manipulation and it is completely illegal in traditional markets. However, in the wild west of crypto-land, unscrupulous traders can still act with little worries for now.

The hope is that as crypto markets mature, these kinds of price manipulation plays will disappear.

As the market grows, the larger amount of cash needed to perpetuate these sorts of acts, and the increased risk that an even larger player could counter the one who initiated the move may deter manipulation.

Bitcoin open interest hits $3.8B as 45% of BTC options expire in 2 weeks

5 reasons why Bitcoin is ‘at the beginning of a bull run’
This Bitcoin Whale Sold at $12,000 BTC Price After HODLing for 2 Years
Comment